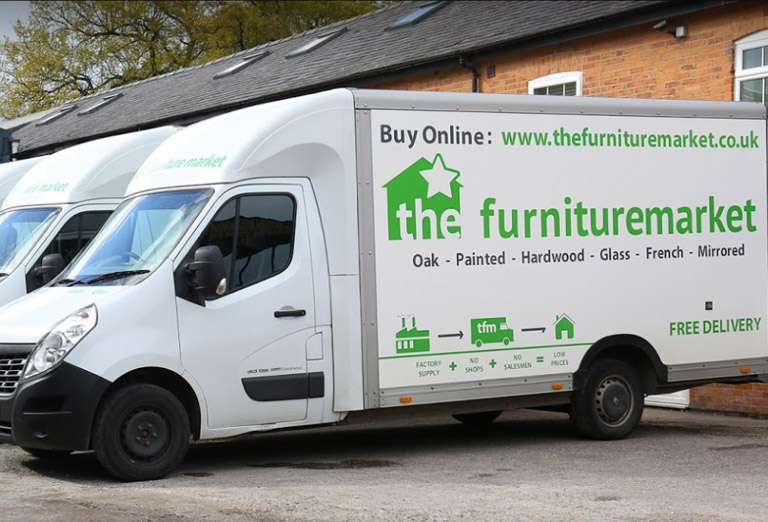 The Furniture Market, one of the largest oak, French and modern furniture retailers in the UK, has succeeded in cutting fleet insurance claims by half thanks to Lightfoot’s trailblazing in-cab driver coaching technology and rewards platform.

Rolled out across its fleet of 16 Renault Master vans, Lightfoot’s dashboard-mounted device, combined with its rewards app, has curbed harsh acceleration, harsh breaking and harsh cornering, helping to lower the severity and frequency of accidents and resulting claims. In so doing, Lightfoot’s driver-focused tech has also reduced vehicle wear and tear costs at the same time as increasing mpg by 15%.

Additionally, Lightfoot has cut vehicle idling by 20% which, combined with the adoption of a smother style of driving across the fleet, has significantly lowered CO2 and other emissions produced by The Furniture Market’s vehicles.

Tests undertaken by Bath University’s Institute of Advanced Automotive Propulsion Systems have proven a direct correlation between Lightfoot’s in-cab visual alerts and reductions in NOx. Its studies show that if drivers half the number of lights lit up on Lightfoot’s pocket-sized in-cab dashboard device, a fivefold reduction in NOx is achieved.

Running a fleet of 16 vehicles has its challenges. Keeping track of drivers is the simple element. Changing driver behaviour is where the really hard work begins. That’s where Lightfoot’s self-managing solution wins out.

Lightfoot’s in-cab dashboard device helps our drivers be the best that they can be through technology that’s subtle, compelling and always on, delivering a feed of helpful on-board coaching mile-by-mile. That guides our drivers to a smoother, safer, and less stressed style of driving, motivated by a host of great rewards which are unlocked on the Lightfoot app when our drivers achieve “Elite Driver” status. That keeps our drivers engaged, motivated and interested. It’s simple, instant and delivers a win-win solution for small fleets. We get happier drivers, an outstanding ROI, and access to technology that you would only really expect to have in large fleets.

Today, our drivers operate their vehicles in a completely different way. All instances of dangerous driving have been eradicated. We’ve also ended over-speeding through the use of limiters, and we’ve slashed over acceleration. The result is a 15% fall in fuel bills, less wear and tear, and a 50% drop in accidents. That wouldn’t have been possible pre-Lightfoot, and enables us to operate without the overhead of a dedicated fleet manager.

By delivering a driver-first approach, aided by our ‘always-on’ visual and audible driver coaching and nudge psychology, we help drivers keep in the sweet spot of their engine. That brings personal reward for them, through prize draws linked to efficient driving, and a swathe of benefits for fleets, ranging from reduced fuel and vehicle maintenance costs, to the fulfilment of occupational road risk management obligations.

Drivers achieving Elite Driver status unlock access to weekly draws on their smartphone app including the chance to win up to £200 in The Drivers’ Lottery. The incentive of cash prizes, and a one in ten chance of winning every week, has completely shifted the dial in terms of driver engagement.

By implementing Lightfoot’s self-managed solution, those in the driving seat are driving change for the better one mile at a time. That’s perfect for micro-fleets and it’s what sets Lightfoot apart as a game-changer in fleet management.

Through real-time feedback and nudge psychology, drivers intuitively become more aware of their driving style, helping them to be less aggressive, smoother and safer drivers. A verbal end of journey score, based on their driving performance, reinforces good habits and links to the driver app where those achieving and maintaining Lightfoot’s Elite driver status can unlock access to prize draws.

The outcome is that Lightfoot helps fleets cut harmful emissions and fuel costs by up to 15%. It also lowers at-fault accidents by up to 40%, and reduces wear and tear costs by as much as 45%.

Considered revolutionary in the fleet management and telematics worlds, Lightfoot’s disruptive approach to reducing accidents has been adopted by some of the largest companies in the market, including Tesco, Asda, Virgin Media, Dixons Carphone, and South West Water.