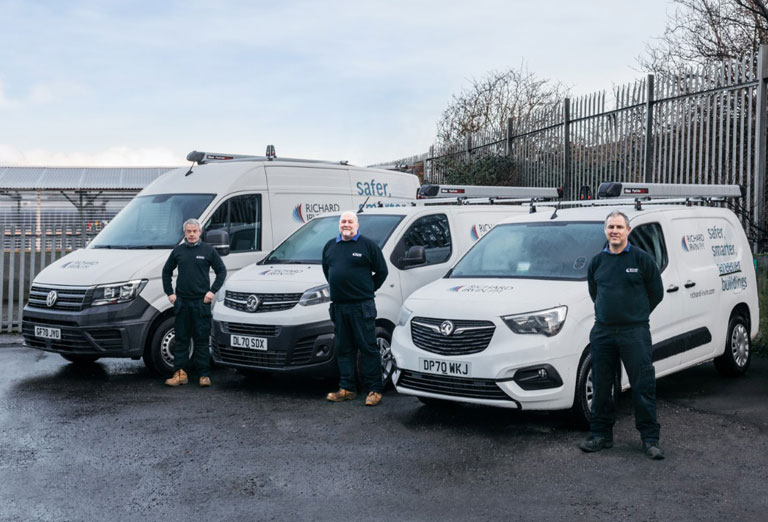 Richard Irvin FM, one of Scotland and the UK’s leading Facilities Management specialists, which provides services to 9,000 commercial properties and 56,00 domestic properties nationwide, has announced that it plans to roll out Lightfoot’s in-cab training and driver rewards platform across its fleet of 225 vans and 90 company cars. The announcement follows a highly successful trial that not only cut CO2 emissions by 8%, but also put an end to all instances of dangerous driving.

Installed to meet Richard Irvin FM’s safety first values, which focus on staff coming to work safe and going home safe, Lightfoot was trialled to assess its ability to safeguard the wellbeing of the company’s workforce.

Rolled out in 91 vans including VW Crafters, Vauxhall Vivaros and Vauxhall Combos, the phase one implementation led to a 30% fall in incidents of harsh acceleration, braking and cornering, playing a key part in reducing the severity and frequency of accidents, at the same time as reducing vehicle and engine wear and tear. The trial also resulted in an 8% lift in mpg and a dramatic 10% fall in idling time.

The gains were made as a result of Lightfoot’s in-cab dashboard device, which keeps drivers in the sweet spot of their engine through visual and audible nudges. This helps users to drive smoothly, and is boosted by the Lightfoot reward platform, giving drivers a reason to be better. Through Lightfoot’s smartphone app, drivers can enter draws for prizes simply by achieving the Elite Driver target level of efficiency, which triggers the highest level of savings for fleets. In Richard Irvin FM’s case, Lightfoot has lifted driver engagement to record levels and has set the business on the path to reduce CO2 emissions over the next four years by over 205 tonnes.

We invest and focus on general health, safety and welfare across our organisation and always have. The behaviour of drivers and the ability to positively change that through direct in-cab training, encouraging safer and more efficient driving, was something that we were looking for, but it was not offered by our standard tracker provider.

“We discussed this with Lightfoot who explained that their driver-led solution focusses on helping drivers to be better by giving them the both the tools and the incentive to be safer, more aware and more efficient. That chimed with our company values, which focus on safety, integrity, excellence, responsibility and collaboration.

“With Lightfoot in place, we were able to deliver on all these, giving our staff the technology to be better, the opportunity and incentive to drive with greater responsibility, a transparent solution that engenders integrity and encourages excellence through leagues and rewards, and a collaborative solution where each and every driver has a part to play in helping the business to be better one mile at a time.

“The results are excellent; our driver performance has increased by at least 51%; we’ve seen a 100% reduction in dangerous driving and a fuel saving of 8%. As a direct result, we are aiming to roll this out across all our fleet of 225 vans and 90 company cars as soon as possible.”

Prior to Lightfoot, Richard Irvin FM relied on core training to ensure the safety of its drivers, other road users and pedestrians.  The challenge was that despite this, drivers regularly fell into poor driver habits. Lightfoot addresses this through its ‘always on’ in cab solution which provides a sustainable and affordable solution that delivers positive, safe driving day in and day out.

Our phase one 91 vehicle implementation was an incredible success. Lightfoot has demonstrated a direct cost negative investment with many indirect critical safety benefits. And more than that, our implementation of Lightfoot has also resulted in the business being recognised for the use of best practice innovation and safety improvements during our recent ISO 45,001 audit.

Richard Irvin FM is driven by a safety first approach to business. Their challenge was how to deliver that to drivers in a way that they embraced. The holy grail was to find a way of making safer driving not only desirable, but second nature.

“That’s where our driver-first self-managed approach fitted perfectly. Aided by our ‘always-on’ visual and audible driver coaching and nudge psychology, we help drivers keep in the sweet spot of their engine. That brings personal reward and a range of benefits for fleets too, encompassing reduced fuel and vehicle maintenance costs, as well as the fulfilment of occupational road risk management obligations.

“Each week Richard Irvin FM’s Elite Drivers are able to unlock draws on their smartphone app including the chance to win up to £200 in The Drivers’ Lottery. The incentive of cash prizes, and a one-in-ten chance of winning every week, has really lifted engagement. Combined with their own inter-league which sits on the Lightfoot portal, 89% of their drivers are now regularly engaged, achieving Elite Driver status and  entering competitions on the app week in, week out.”

Through real-time feedback and nudge psychology, drivers intuitively become more aware of their driving style, helping them to be less aggressive, smoother and safer drivers. A verbal end of journey score, based on their driving performance, reinforces good habits and links to the driver app where those achieving and maintaining Lightfoot’s Elite driver status can unlock access to prize draws.

The outcome is that Lightfoot helps fleets cut harmful emissions and fuel costs by up to 15%. It also lowers at-fault accidents by up to 40%, and reduces wear and tear costs by as much as 45%.

Considered revolutionary in the fleet management and telematics worlds, Lightfoot’s disruptive approach to reducing accidents has been adopted by some of the largest companies in the market, including Tesco, Asda, Virgin Media, Dixons Carphone, and South West Water.