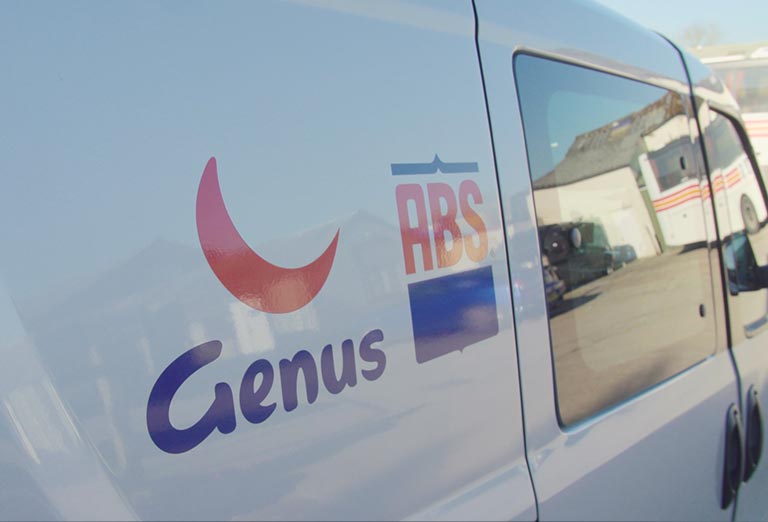 Genus, one of the world’s leaders in animal genetics, has seen dramatic double-digit improvements in fuel efficiency following the successful roll-out of Lightfoot’s award-winning in-cab technology and rewards platform across its fleet of 580 vehicles.

Installed in 380 vans and 200 company cars, Genus has seen an MPG uplift of 10.4%. The business has also seen an end to instances of dangerous driving and has seen enhanced driver wellbeing following the introduction of Lightfoot’s First Notice of Loss alert service.

Genus breed better pigs and cattle for farmers so that they can produce high quality meat and milk more efficiently and sustainably. Core to Genus’s values is responsibility to animals, colleagues, customers and communities. Lightfoot’s ability to enhance driver safety on the road at the same time as cutting the organisation’s carbon footprint, including the reduction of harmful particulates linked to NOx, was a major factor in Genus’ selection of Lightfoot.

Tests undertaken by Bath University’s Institute of Advanced Automotive Propulsion Systems have proven a direct correlation between Lightfoot’s in-cab visual alerts and reductions in NOx. Its studies show that if drivers half the number of lights lit up on Lightfoot’s pocket-sized in-cab dashboard device, a fivefold reduction in NOx is achieved.

Commenting on the transformational impact that Lightfoot is having on the way Genus’ fleet is now being driven, Adrian Davies, Global Fleet & Cost Manager, said:

We’ve seen a positive change in driver performance across the board. The results are excellent, and our Lightfoot driver scores have increased by 68.4% with a 100% reduction in dangerous driving and a fuel-saving of 10.4%.

“We’ve also introduced Lightfoot’s FNOL feature, which has become a great help to the business, enabling us to react instantly, checking driver welfare should there be an accident or incident, and enabling us to arrange the correct level of help. This further enhances our duty of care and the wellbeing of our staff who spend a significant amount of their working life travelling to and from customers.”

Running a fleet of 580+ vehicles across the UK and Worldwide has its challenges. Keeping track of drivers is the simple element. Understanding and adapting driver behaviour is where the serious management of our fleet takes place.

“With Lightfoot, we’re seeing high levels of driver engagement, and the positive impact of competitions within the regions where our teams compete against colleagues and friends. The automation of Business & Private mileage has also been a great addition, saving our drivers time on admin.

“In our view, Lightfoot is the carrot and not the stick. Our drivers have bought into the system wholeheartedly, and all the great features and rewards that Lightfoot has to offer them.”

The safety of drivers at Genus is a number one priority for the business. By transforming their driving style to be more mindful and rewarding them for doing so, Adrian has succeeded in eradicating dangerous driving, which is more often than not linked to bad habits.”

Mark Roberts added: “Lightfoot keeps Genus’ drivers safe, aided by our FNOL solution should an accident occur. Drivers appreciate positive measures that are designed to look after them, especially if they can see an upside for themselves, which is where our rewards platform comes in to its own.

“Genus’s drivers have clearly embraced a better style. The result is safer drivers, lower levels of accidents, vehicle damage, downtime and wear and tear, and cuts in fuel bills and emissions by more than 10%.”

Lightfoot’s innovative in-cab driver feedback helps drivers achieve greater efficiency from their vehicles with fuel savings of up to 15%. It also reduces harmful emissions by 15%, at-fault accidents by up to 40% and wear and tear costs by 45%. Lightfoot’s impact on driver safety has led to endorsments from many of the UK’s leading Insurers and Brokers.

Lightfoot’s app gives users full insight into their performance and score, alongside access to exclusive competitions which drivers can opt in to enter as soon as they achieve Lightfoot’s ‘Elite Driver’ standard; the point at which fleets see the best efficiencies and savings across the board. In addition to the highly popular cash-prize Drivers’ Lottery, drivers can enter competitions for a range of other prizes that serve as an incentive to maintain a smoother driving style.

Considered revolutionary in the fleet management and telematics worlds, Lightfoot’s disruptive approach to reducing accidents has been adopted by some of the largest companies in the market, including Virgin Media, Dixons Carphone, and South West Water.

Many companies who turn to Lightfoot have had telematics systems for years which have always provided a wealth of data to managers who are then relied on to communicate this information back to drivers. Companies have realised that this approach is fundamentally broken and the wrong way around. Instead, they look to Lightfoot’s bottom-up approach to engage and rewards drivers, empowering those in the driving seat to drive change.