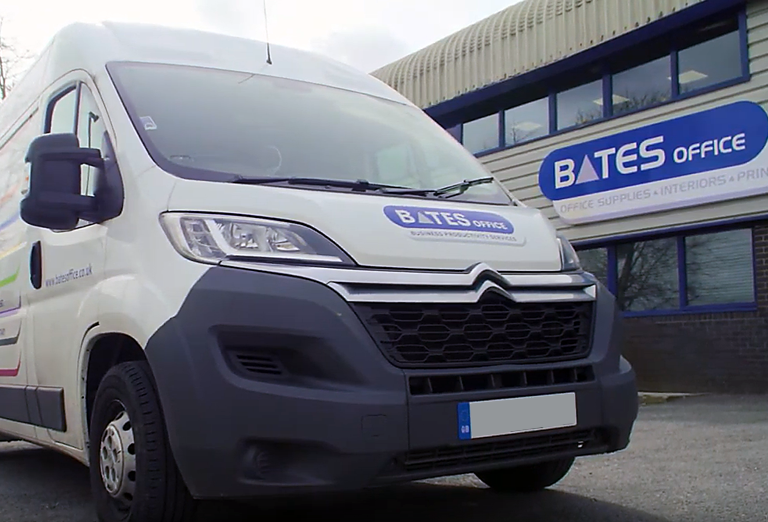 Bates Office Services, one of the country’s leading office supplies and services providers, has cut emissions by 13%, lowered instances of dangerous driving, cut idling by 3% and increased overall MPG by in excess of 13%, thanks to Lightfoot’s industry-leading driver rewards platform and in-cab driver guidance technology.

Having installed Lightfoot across its fleet of 60 vans – which together travel up to 2 million miles each year – Bates Office Services is now seeing fuel savings of between £6,000-£7,000 each month.

Having successfully trialled Lightfoot, the business, which delivers office equipment and furnishings as well as collecting and recycling confidential waste, among other services, has rolled Lightfoot’s in-cab technology out across its entire fleet. In the first five months alone, this has not only cut fuel bills but has led to a significant fall in accident numbers, down from 15 over twelve months to just one in five months.

Commenting on the dramatic difference that Lightfoot has made to the performance of the fleet Ben Hensby, Operations Director for Bates Office Services, said:

We trialled Lightfoot to see if it stood up to its claims. In a very quick space of time there was a real buzz around it. Our drivers were earning prizes and those outside the trial started asking ‘why haven’t we got it, we want it’.

“The biggest appeal for us is Lightfoot’s ease of use. It’s easy to get clear data from it and it provides an absolutely crystal-clear picture, as opposed to what you might perceive. Even the drivers that you thought were good have opportunities to improve and now, given the rewards app, they have the incentive to be better too.”

“Our fuel bill is one of the top four or five lines in our profit and loss, so to cut that by 13% each month has made a huge difference to the business. It’s the clearest piece of ROI you could ask for and made rolling Lightfoot out across the fleet one of the easiest sales to the board I’ve had in all the time I’ve worked at Bates.

I can categorically see an improvement in driver behaviour and that’s led to a big reduction in our insurance claims. Our insurer also endorses Lightfoot and that, for me, went to absolutely concretely confirm that what we were doing was the right thing.”

“It’s great to see that Lightfoot has had such as positive impact on Bates Office Services’ drivers. Once a few of them had it, the rest wanted a piece of the action.

The in-cab assistance and verbal feedback from the pocket-sized dashboard device – including end of journey scores – has profoundly change the way the Bates fleet is driven.  As a result, drivers want to be better than their colleagues and they all want to win prizes. The outcome is smoother, safer and more fuel-efficient driving, saving the business thousands of pounds each month and that’s before you factor in reduced vehicle downtime as a consequence of fewer accidents.”

“We introduced Bates Office Services to Lightfoot, a Gallagher Risk Management Partner, because we could see a natural fit and it’s great to see that Bates are already seeing a reduction in fuel and incidents”.

“Great to see another Allianz client using Lightfoot to help manage their risk. We have worked with Lightfoot for over 5 years now and the Allianz London Motor Team have a good understanding how this technology can help a client lower fleet risk through improving driver behaviour”.

Lightfoot’s app gives drivers full insight into their performance and score, alongside access to exclusive competitions which they can opt in to and enter as soon as they achieve Lightfoot’s ‘Elite Driver’ standard. This is the point at which fuel savings and reductions in harmful emissions of up to 20% are possible. It’s also the point at which wear and tear costs fall by up to 45%, and at fault accidents drop by up to 40%.

Drivers maintaining Elite Driver status are able to enter weekly competitions to win cash-prizes in The Drivers’ Lottery as well as a range of other rewards encompassing consumer technology, which serves as an additional incentive to maintain a smoother driving style.

Lightfoot’s dashboard display device uses live engine data to provide real-time visual and audible feedback to drivers, helping fleets improve efficiency and safety one mile at a time. Considered revolutionary in the fleet management and telematics worlds, Lightfoot’s disruptive approach to reducing accidents has been adopted by some of the largest players in the market, including Virgin Media, Greencore, and South West Water.

To see an interview of Ben Hensby, Operations Director for Bates Office Services, talking about the positive impact of Lightfoot, visit https://www.lightfoot.co.uk/fleets#watchvideo