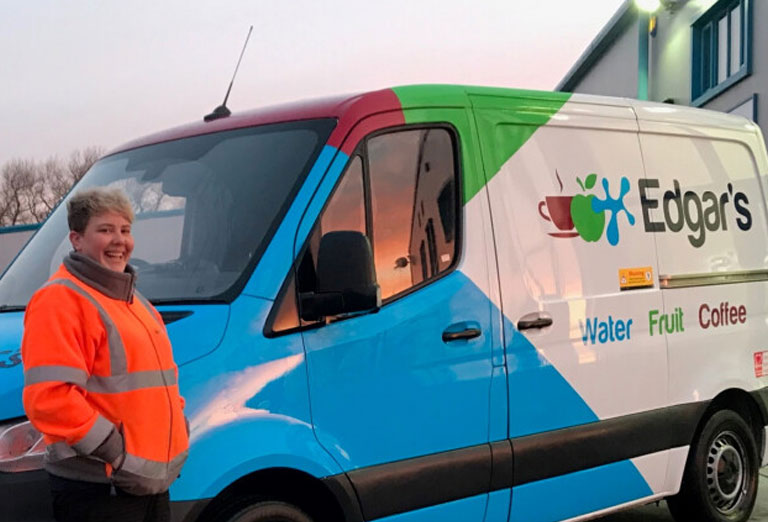 Edgars Water, one of the largest suppliers of hydration solutions in the UK, has announced the successful installation of Lightfoot’s award-winning in-cab technology across its fleet of 60 vans. Using Lightfoot’s unique driver rewards platform, Edgars Water has seen a significant drop in its fuel bills with an MPG uplift of 6.3%, a fall in vehicle idling by 4% and an end to instances of poor or dangerous driving.

The organisation, which delivers water to offices throughout the UK, brought Lightfoot onboard to meet its commitment to staff wellbeing at the same time as reducing its carbon footprint and production of harmful particulates linked to NOx. Combined with Lightfoot’s real time driver guidance, Lightfoot has cut emissions across Edgars Water fleet by in excess of 6%.

Commenting on the difference Lightfoot has made to the way in which its drivers use their vehicles, Josh Burgess, Group Distribution Manager at Edgars Water, said:

“Edgars’ focus is to ethically achieve sustainable growth through providing profitable and affordable solutions that meet our customer’s needs. How we do business is just as important as what we do. We aim to have a positive impact on all our staff and customers alike through the high value that we place on people and relationships. Being of like mind, Lightfoot was a natural match for us, helping Edgars to keep true to its principles whilst reducing our carbon footprint.”

Josh Burgess added: “Running a fleet of over 60 vehicles has its challenges. Keeping track of drivers is the simple element. Tracking and changing driver behaviour is where the serious management of our fleet takes place, and that’s where Lightfoot has been transformational.

“Thanks to Lightfoot, our drivers can see the positive change in their driver behaviour through the on-board assistance and verbal feedback that the device provides, including end of journey scores. Combined with the Lightfoot rewards package and our own inter-league, which runs between our Shoreham, Marden, Hook and fleet sites, we have seen positive competition and a lift in our Elite Driver numbers, up from 16% – observed during the blind monitoring phase – to 95%.

“The results are undeniable and excellent. Our driver performance has improved hugely with a 100% reduction in dangerous driving. Added to fuel savings of 6.3%, Lightfoot has more than proven itself, creating a new breed of smoother, more mindful drivers virtually overnight.

“Our next step is to install Lightfoot into the remainder of the broader Edgars fleet, bringing the total number of vehicles fitted with the in-cab device, to in excess of 75.”

“Edgars Water’s ethical approach to business is a fundamental part of the fabric of its operation, which is why Josh and his team were so interested in working with us. Our in-cab technology helps the business stay true to its values, improving the wellbeing of its drivers at the same time as saving money on fuel, wear and tear, and repairs caused by accidents. It’s a win, win outcome for all concerned.”

Previous post: Groundwork London installs Lightfoot across van and utility vehicles
Next post: An Important Message From Our CEO About COVID-19