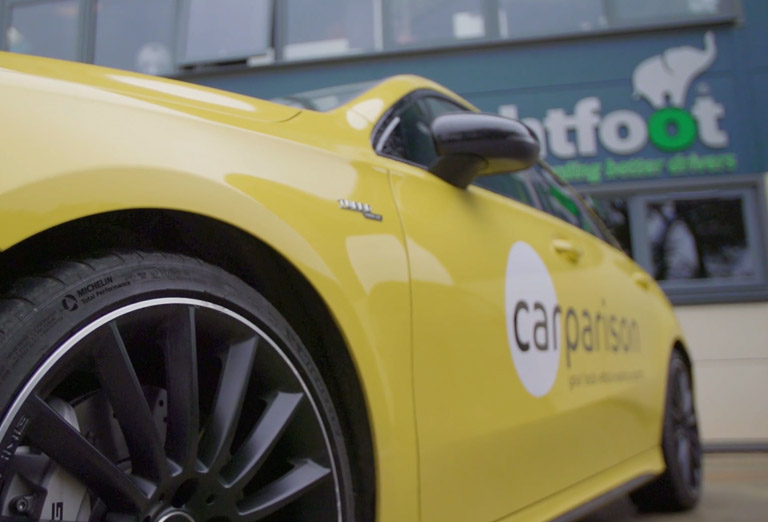 Lightfoot has created a device that plugs into your cars’ on-board computer and monitors your driving styles; then uses audio and visual prompts to help you drive more economically. Alongside the potential for fewer emissions and lower fuel costs, drivers who achieve what Lightfoot considers to be an ‘elite’ score – 85% or above, can also win rewards or cash prizes.

Following the announcement of their partnership, both companies wanted to put this claim to the test. Could Lightfoot take the Carparison A35, a relatively thirsty, high-powered petrol performance car, and drive it economically? Testing out the theory of ‘it’s not what you drive; it’s how you drive’.

Matt Woodward, Carparison General Sales Manager, said, “This is a really exciting partnership for both Carparison and Lightfoot. If we can mutually promote some initiatives that help keep our lovely corner of the world clean and green while understanding that not everyone is quite ready for the full transition to fully electric vehicles, then all for the better.”

The experiment took place in two stages and over two weeks. For the first week Lightfoot’s nominated driver, Commercial Executive Paul, would drive the car in what’s known as ‘Blind Mode’ – so, whilst the device would be on and monitoring how he drove, it would not be giving feedback. It would, however, record the data and set a benchmark for potential improvement in the second week.

In week two, the device would go in to ‘Live Mode’ and Paul would be given prompts as to when he was driving too aggressively or inefficiently. Examples of prompts could be an audio or visual warning when Paul’s driving became less smooth and the vehicle’s engine was being stressed.

A key fact to consider is that Lightfoot isn’t expecting you to get 100% on all of your journeys and understand that in some situations – heavy braking or accelerating is necessary to navigate situations safety. Its aim is to improve the majority of journeys and advise drivers on how to drive their own cars as efficiently as possible to make long-term improvements.

Experiment duration:
14 days
The Car:
Mercedes-AMG A 35, Automatic, 2.0 Litre Petrol with 300bhp.
The Driver:
Paul Pugsley, Commercial Executive at Lightfoot. Age: 20.
The Routes:
Paul would mainly be driving between Topsham and Lightfoot HQ – Innovation Valley, just outside of Exeter. On average, commuters drive 10 miles to get to work each day (GOV.UK) so the approximately 20-mile trip is a representative commute for many of us. Take in socializing and trips in and around Exeter and Devon, and the A35 will have traveled in various driving and road conditions.
Total miles traveled:
499.

Paul won’t deny the fact that the car got the better of him in the first week without the help of Lightfoot. Being his first time in an A35 he only scored 14%. Paul also had to fuel the car twice this week; something that many will resonate with and would certainly want to minimise as much as possible

The second week saw Lightfoot go live. So, if Paul got a little bit throttle-heavy, the device’s visual prompts would shift from the smooth driving ‘green’ zone into amber, then red. In severe cases, an audible ‘nudge’ would be given, helping to act as a reminder to ease back off the gas. The aim of the game is obviously to stay in the green for the majority of the time in order to improve your score and therefore reduce fuel costs and emissions. After a week of driving with the device enabled, Paul came back with a final score of 67%.

We asked Paul what he thought of the results, “I had great fun driving the car for two weeks, but loved being able to demonstrate the message of it not being what you drive; but how you drive it… which is exactly what Lightfoot is all about”.

Is 67% a good score?
Whilst 67% is shy of Lightfoot’s ‘Elite Standard’ of 85%, it shows a massive 53% improvement from the blind week. By following the prompts, it also meant Paul made one fewer trip to the petrol station (saving around £60). This, across the space of a year, could mean a massive financial saving. It’s also worth noting that Lightfoot wouldn’t expect anyone to immediately achieve Elite status; understanding that it takes time to adjust to both a new driving style and a new car. Paul was confident that another week in the car would have brought him even closer to that 85% mark, but none the less, he was amazed at the improvement he had made with fairly minimal changes to his driving style.

Mark Roberts, CEO of Lightfoot added, “Being able to work with a local company in the automotive sector is always exciting, especially when they understand the importance of encouraging better driver habits to help cut emissions on our roads. We look forward to growing this partnership and seeing lots of Carparison vehicles being driven smoothly with Lightfoot”.