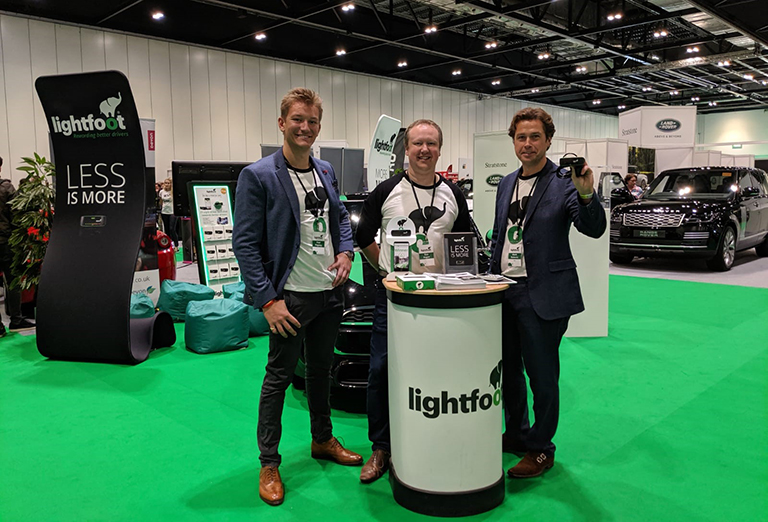 Between 16-19 May, the Lightfoot team pitched up at ExCeL London for the London Motor Show – the UK’s leading automotive show – to help the tens of thousands of attendees learn how they can reduce the harmful effects of driving.

In what was effectively the national launch of our sustainable driving technology, the London Motor Show put Lightfoot in front of tens of thousands of drivers who care about the planet, their wallets, and making the most of their time spent behind the wheel. It was a match made in heaven!

Our crack team of Lightfoot Luminaries (bottled calling them Marky’s Angels here) spent four days speaking to the public, businesses, and press; spreading the message of smoother driving to the throngs of interested attendees.

In fact, the entire team agreed, our favourite part of our first London Motor Show was the opportunity to speak with such a varied audience, from car nuts and tech whizzes to aspiring racing drivers and some of our favourite celebrities!

We’ve gathered some of our favourite images from the weekend below. Hopefully, they capture the highlights of Lightfoot’s big weekend in London.

Some of the best shots from the London Motor Show

Paul, Dan, and Mark from our Commercial team – wowing customers and breaking hearts, and Mark speaking with Luke Wilkinson of Auto Express Magazine

Catching up with Neil, one of the many business owners using Lightfoot to reduce costs and emissions, plus one of the youngest members of the Lightfoot Revolution

Rubbing shoulders with some automotive greats – Tim and Fuzz, from Car SOS, and Tiff Needell

The event was a huge success and, to tell the truth, we were a little blown away by the fantastic response our team and product received from so many of the attendees.

Exhibiting next door to Tesla, sharing a space with some of the UK’s most innovative automotive brands, and meeting Tiff Needell(!)… the London Motor Show certainly felt like the perfect place for Lightfoot.

We’re already counting down the days to the 2020 show. Bring it on!

Previous post: Viral vehicles: drivers, learn how to clean a van!
Next post: How you drive is more important than what you drive