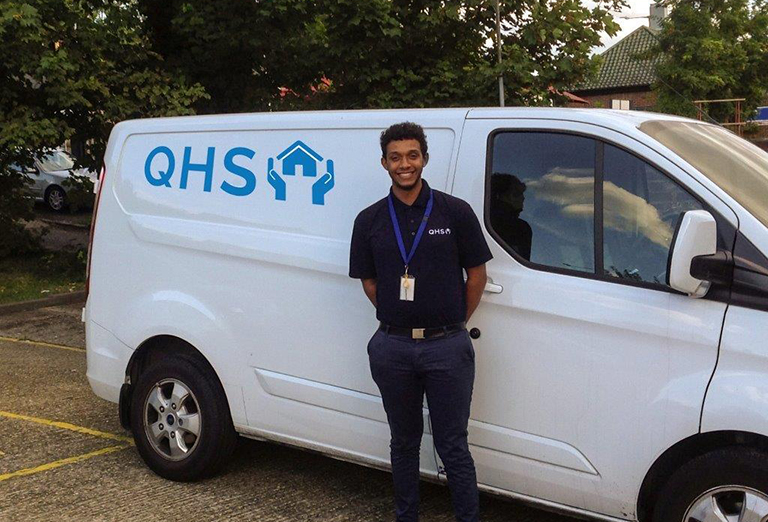 Quality Heating Services (QHS) provides a 24/7 service, primarily within the social housing sector, covering the installation, servicing and repair of gas fired central heating appliances, systems and controls. As a company dedicated to the highest levels of customer service and support, QHS is determined to ensure the safety of its fleet and uphold its stellar reputation on the roads.

In early 2018, QHS was looking for ways to reduce its overall excess contribution without having to lose man-hours to conventional driver training, and was introduced to Lightfoot by its insurer, Allianz Insurance plc.

“We recommended Lightfoot to QHS because we were confident it would have a positive impact on their claims frequency and severity. The team at QHS are forward-thinking and understand that driver behaviour technology has come on a long way in recent years, bringing with it the potential to make a genuine difference to their fleet performance.”

With some Allianz clients seeing at-fault claims and associated costs fall by 40% and 60% respectively, QHS was eager to see what Lightfoot could do to improve driver safety and reduce risk across their fleet.

“Lightfoot appealed to us for a number of reasons. The fact that they could tell us straight away that other businesses have nearly halved their at-fault accident rates gave us confidence that Lightfoot could be beneficial. The option to run a structured trial with Lightfoot also gave us more time and data to really weigh up the decision, so it seemed sensible to follow that path.”

QHS agreed to trial Lightfoot in their fleet for a four-week period. Reviewing performance after Lightfoot was installed, with drivers receiving real-time feedback in-cab and being guided to a more efficient driving style when needed, revealed some impressive results.

On top of improving mpg by 11.3%, QHS also recorded significant improvements in driving behaviours (reducing Lightfoot’s measurement of dangerous driving by 67%) and idling (43%) – both important measures for analysing driver safety and emissions output.

With improvements such as these, QHS can expect to achieve net savings approaching six-figures in operational and claims costs over a five year period, along with cutting well over 100 tonnes of CO2 from their carbon footprint.

“The trial process was exemplary – the level of support and communication from Lightfoot was second to none and any issues that came up were solved promptly and effectively. Seeing the impact Lightfoot made being active in the vehicles convinced us all that it was the right technology to protect our drivers and our vehicles.”

After rolling out Lightfoot across their fleet, QHS has been consistently benefiting from lower fuel bills and fewer accidents – protecting costs and promoting road safety at the same time. When it came to renewing their policy, the benefits became crystal clear.

In the three months prior to the installation the frequency of accidents stood at 66%, which was “very high” compared to other risks of this type.

In the seven months after the installation of Lightfoot, the frequency dropped to 28%, and the loss ratio improved significantly. This gave Allianz the confidence to renew the policy knowing that it would be a healthier risk going forward. Following renewal, the fleet performance has continued to improve with underwriters in agreement that Lightfoot has been the driving force behind this change.

“Real-time feedback is so valuable when you have a high number of drivers.

Lightfoot is utterly invaluable beyond any other programmes that are out there that could have been used, purely because QHS doesn’t have to lose any engineers to driver training programmes. You are by default encouraging the drivers to actually want to be better and, therefore, indirectly getting them to assume responsibility for their fleet.

This has been evident with a 34% reduction in reported incidents, resulting in a 66% reduction in claims costs in comparison to the same period for the previous insurance year.”

This is another example of the multi-faceted benefits Lightfoot can bring to businesses.

“QHS are at the forefront of their industry in so many ways. Not only do they deliver an exceptional service based on customer support and trust, they are making every effort to reduce the impact of their fleet. To have reduced their claims frequency by such a significant amount is a testament to how well QHS and the entire fleet have taken to Lightfoot – 94% of QHS drivers were Elite in March 2019. This is a fantastic success story for everyone involved.”

Previous post: Sustainability is made up of #SmallChanges
Next post: Lightfoot appoints Air Marketing Group to support Breathe Exeter