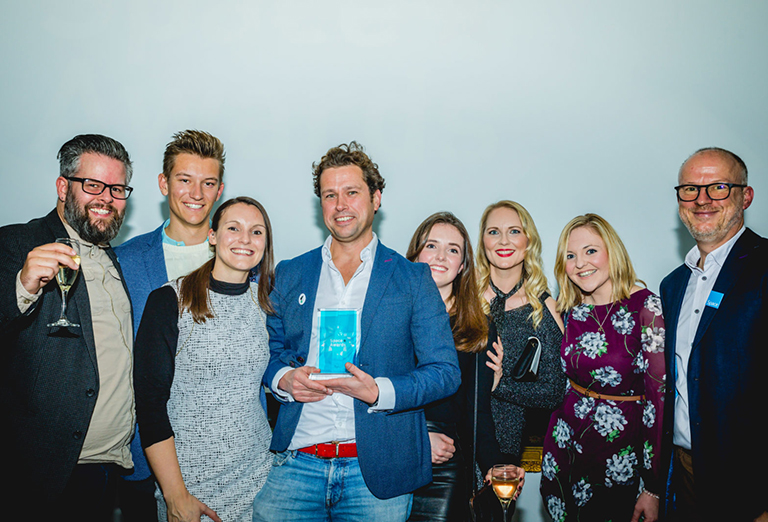 Fresh off the back of our announcement of a £3.2m investment deal from BGF that has also seen ex-CEO of Dyson, Martin McCourt, join the board, we also have a couple of award wins to celebrate.

Lightfoot has been crowned the ‘Best Workspace’ in the Greater Exeter area and claimed victory in the Made in the South West Awards, walking away with the hotly-contested Digital Engineering/Technology Award.

Organised by Exeter-based workplace designers Space, and backed by Exeter City Council and Exeter Chamber, the Space Awards celebrate innovative, well-designed, happy workspaces in the Exeter area. The criteria for the Best Workspace category were broad, but looked for “organisations with a fantastic overall workspace – well thought through, innovative use of space, happy employees and all-round great place to work.” Lightfoot came out on top of a six-strong shortlist to win the award.

“The judging of this award was really tough and there was some great competition. It eventually came down to people not property. Lightfoot has a fantastic, engaged and excited team. It must be a pleasure to work in this environment. Our purpose is to create engaging, people-focused workplaces, which reaps dividends for companies. Lightfoot embodies that.”

The award comes roughly half a year after we relocated to our new headquarters of ‘Innovation Valley’, along with sister company Ashwoods Electric Motors. We designed and built the space from scratch ourselves, making the award especially meaningful. Full of personality and quirky features, including an antique revolving door from a grand hotel as the entrance to the boardroom and a clever design scheme that mimics a natural landscape, the workspace on the A38, near Chudleigh, is fast becoming a landmark.

Awarded in recognition of our unique and inspiring workspace, as well as the environment and staff culture that it has helped expand, founder and CEO of Lightfoot Mark Roberts was delighted with the accolade, commenting:

“Moving to Innovation Valley was a landmark moment that has pushed us on to an exceptionally strong second half of 2018. We’re finishing the year having gained serious financial and industry backing, moved to a new, state-of-the-art home, and won two awards celebrating what we’re all about – being a pioneer that disrupts traditional models of technology and work. I’m so proud to see the company succeeding like this and we look forward to continuing in the same vein in 2019.”

Made in the South West Awards

We were hugely proud to fight off a nine-strong shortlist and claim the Digital Engineering/Technology Award at the Made in the South West Awards.

Held at The Bristol Hotel on 08 November, the Made in the South West Awards ‘showcases manufacturing from across the South West and gives the region’s companies the opportunity to celebrate their commitment to world-class quality and excellence.’ Winners in each of the 12 categories are automatically entered into the grand final – the Made in the UK Awards – ‘where the best of British manufacturing will be celebrated.’

The award follows a year of continued growth for the company, having doubled our headcount in the last 12 months and relocated to purpose-built Innovation Valley in the summer. After a strong year in the fleet sector, in which we have added industry-leading customers to an already-strong roster including Virgin Media, Greencore, and Dyno Rod, we have embarked on the launch of our industry-leading technology to private motorists through automotive retail giant Halfords.

Collecting the award on the night, Head of Engineering Calum Roke said: “We were up against some really high-quality manufacturers in this category. We’re delighted to have won the award, particularly given the strength of the engineering industry in the South West. All too often the West Country can fly under the radar when it comes to advanced engineering and technology manufacturing, however, we – and all of the other businesses on the shortlist – are proof that the region is standing tall, becoming a force to reckon with. Long may it continue, and long may we keep winning awards for it!”

South West Business Insider editor, David Clensy, said: “The South West has one of the largest concentrations of high-value manufacturers in the UK. We should be proud of our manufacturing and advanced engineering community – from the great food and drink brands to the cutting-edge aerospace and defence companies; from the vacuum cleaner billionaires to the great digital technology companies driving innovation in the region.”

Previous post: Lightfoot, climate change, and the part you can play
Next post: Sleigh the daily commute in the new year with Lightfoot